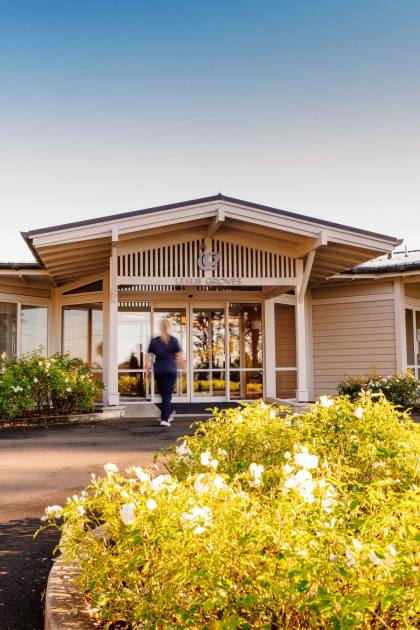 Leslie Groves Rest Home was established in 1952 in a large house in Wakari Road, Wakari, Dunedin. In the early years there were generous donations of furniture and household goods to help set up the Home and people gave freely of their time and expertise to work on the renovations and gardens. Rosters of volunteers helped with residents’ care and to attend to household chores such as washing, ironing and cleaning. Many residents were often still able to look after themselves as well as assist with household tasks.

In 1963 an architecturally designed, single story home was built on the present site in Sheen Street, Roslyn, Dunedin. Further modifications to the Rest Home followed in 1973, doubling the accommodation and creating an enclosed courtyard and garden. A further refurbishment in 2002 brought the Rest Home to the current design.

In September 1997 the Leslie Groves Hospital opened, catering for 25 Hospital Level aged care residents and 41 Psychogeriatric residents. The Hospital was previously part of Wakari Hospital and is situated on a sunny corner site surrounded by beautiful spacious grounds, with spectacular views of Mt Cargill.

As the hospital was built in the 1950’s, by modern standards it was considered outdated -most rooms were built to accommodate multiple residents with only a wash basin and no bathing or toileting facilities. In 2007 the Board of Trustees accepted a 10 year Strategic Plan which outlined the redevelopment of the Leslie Groves Hospital facility in Wakari. The most recent major redevelopment commenced in July 2011 and the result has been a beautiful purpose built facility.

In 2022 as we celebrate 70 years we are moving on to Stage 8. This is an exciting extension to Taieri our Psychogeriatric Unit. As well as an additional four rooms it will provide state of the art lounge and recreation areas specifically designed for advanced dementia needs.